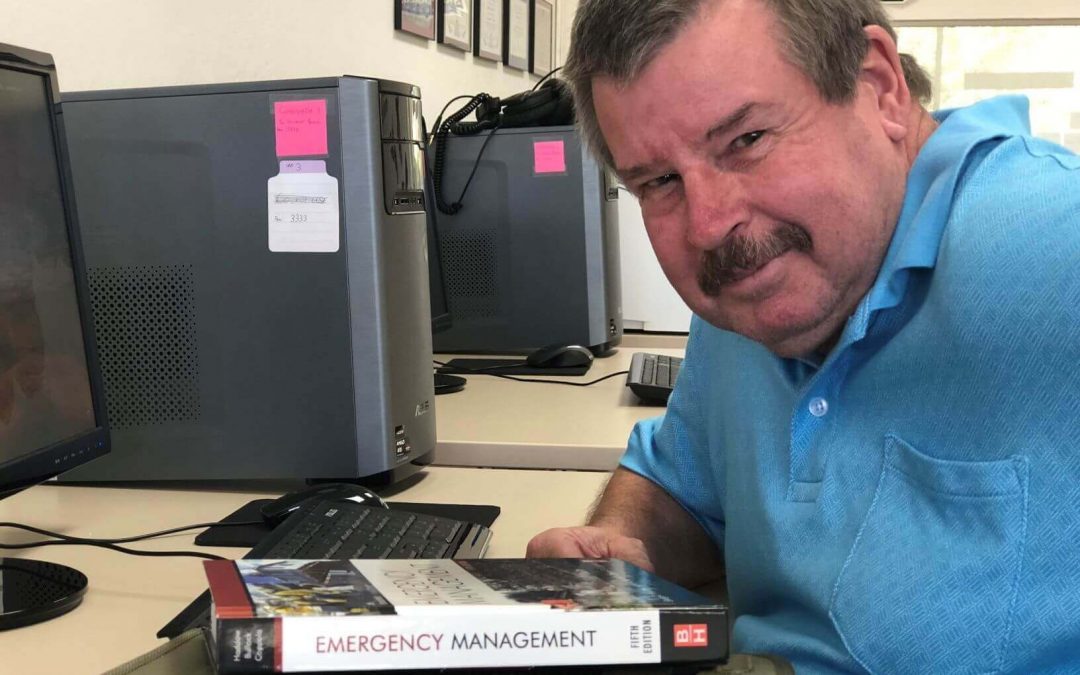 For Jay Milbourne, going back to school at age 62 is a great opportunity to develop a healthy new habit. Jay explained recently that he enrolled in the Homeland Security professional certificate program at Coastline Community College for intellectual stimulation and to “stay sober.” Working the graveyard shift in Security at Jackson Rancheria the past several years, Jay says he slipped into some bad habits—watching TV and drinking at the end of his workday which is 7am. Now, ten months into sobriety, Jay explains, “You have to keep stretching your mind or you’ll be dull. I don’t want to go back to drinking and being dull.”

Jay’s résumé reveals a multi-talented multi-tasker. Rarely has he worked less than two jobs at a time. Trained out of high school in injection molding, Jay worked full-time for almost ten years in LA with one of the pioneers in laser disc manufacturing while also working part-time with his father’s interior shutter installation business. In the late 80s, Jay followed his Dad to Amador County to install shutters full-time. Soon afterwards, the recession of 1990-91 hit and Jay needed to supplement his income. He started working at Jackson Rancheria when it was still located in a small metal building. Working weekends, Jay ran the mega bingo, worked as cashier and served as a slot attendant. He went full-time within a few years and last March celebrated his 26th anniversary with the casino.

In the early days of Jackson Rancheria, there were few employees and the bingo hall closed each night at 10pm. Jay fondly recalls getting to know Margaret Dalton and attributes his longevity there to the values that she instilled as an employer in Jackson Rancheria’s culture. Jay explains, “she built the foundation–the value system of appreciating employees–upon which the whole enterprise is based.” Indeed, the Rancheria’s on-site Health Clinic is where Jay turned when his drinking got out of control. There he found the support and encouragement to seek rehab, build new routines and reclaim his life.

These days, Jay keeps busy with his full-time schedule as a Security officer at Jackson Rancheria, building a 450 square foot deck at his residence and completing his assignments for his “Emergency Management” class at Coastline. As a recipient of one of Jackson Rancheria’s $1500-per-year scholarships for eligible employees, Jay takes his studies seriously and is a regular visitor at Amador College Connect’s center on Highway 49 in Jackson for assistance with course registration, technology issues and to complete assignments on the center’s computers. Jay studies at home at his dining room table but coming into the center regularly allows him to connect with other students and build his technology skills by interacting with staff and mentors. He finds that the pace and structure of online classes help keep him engaged as an active learner.

Jay’s enthusiasm for emergency management and online learning is contagious. Despite his age he says he never thinks about retiring; going back to school has helped Jay build healthy new routines for the future. Whether he ever gets to use his professional certification in Homeland Security is of little concern to Jay at this point. The intellectual stimulation his coursework and his interactions with classmates and instructor are supporting his sobriety and Jay Milbourne is feeling happy and satisfied with his life.